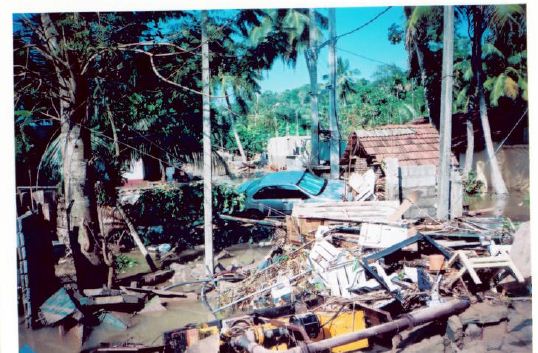 On the 26th of December 2004, when the Tsunami hit Sri Lanka and in the days following it, 35 322 people lost their lives in Sri Lanka along with four French nationals and 440 000 people were displaced. 10 years later, it is difficult to imagine what this natural disaster destroyed on its path. Let us take a minute in honour of those who lost their lives, in support of those who lost loved ones and in recognition of the invaluable efforts which were made to help, protect and rebuild the country in its aftermath.

Throughout the world, a wave of solidarity was born in response to the destructive tsunami waves of which images travelled rapidly across the globe. The tsunami changed the approach to humanitarian aid : the private sector, press and media, local government and individual donors all joined the bilateral, multilateral and NGO efforts to come in aid of the populations of the most affected countries. It is such altruism which prompted the help not only of 22 French NGOs, but also of a number of locally based French nationals to lend a helping hand in Sri Lanka.

Directly following the tsunami, France rallied the donor community to help Sri Lanka recover from the disaster. Actions for emergency aid, reconstruction and prevention of disasters were sent out rapidly to Sri Lanka and to the Maldives, for a total amount of 130 million euros. A 300 million euro facility for tsunami-affected countries was implemented by the French Development Agency (Agence Française de Développement –AFD) on one hand and by the French Ministry of Economy and Finances as part of the “Fund for emerging countries” (RPE) on the other hand.

France financially supported more than twenty NGOs’ projects as part of post-tsunami aid, in various fields such as water decontamination, fishing and agriculture, education and vocational training, income generation and « cash for work » programmes, health, psychosocial help, housing and disaster prevention/management. In this light, 6,8 million euros were granted to Sri Lanka. Before the tsunami, only 3 French NGOs were present and active in Sri Lanka : Secours Catholique (Caritas), Handicap International and Action Contre la Faim (ACF). As soon as two days after the tsunami, we saw a huge influx of French NGOs and the creation of many NGOs locally by French nationals. By January 2005, almost 60 French NGOs were active in Sri Lanka.

Since the tsunami, in partnership with the Government of Sri Lanka and the Asian Development Bank, France is co-financing the Jaffna and Kilinochchi Water Supply and Sanitation Project. This project aims at giving inhabitants of targeted urban and rural areas in the peninsula access to water and sanitation while strengthening the capacity of local organisations to protect and manage their water resources. In addition, the French Ministry of Economy and Finances provided a concessional loan of 9.5 million euros for the the provision of heavy medical equipment to hospitals in various cities.

French Agency for Development’s contribution to the reconstruction of Sri Lanka The Eastern Province was by far the most affected region of the island. It is estimated that 45% of the total damage in Sri Lanka was caused in the Trincomalee area. 1,500 kilometres of roads were destroyed by the tsunami. In response to this, France has been consistently supported the reconstruction and development of the Eastern province with major infrastructure projects (roads, bridges, electricity and water supply). Through a very concessional loan of 79 million euro (100 million dollars) from AFD to the Government of Sri Lanka, the project focuses on the construction and rehabilitation of public infrastructure in the district of Trincomalee.

AFD provided 10 million euros for a project to uplift the construction sector in the Tsunami affected area through a very concessional line of credit of 9 million euros managed since 2005 by the Central Bank of Sri Lanka and through the construction of the Advanced Construction Training Academy (ACTA) for 1 million euros. To this day, AFD continues to support a post-tsunami programme run by the French NGO Solidarité Laïque for a program with a grant of roughly 620 000 euros for a programme which aims to contribute, in partnership with 3 national NGOs, to the goal of “Education for All” in the Eastern Province by strengthening the capacities of the different actors in the field of education and improving exchanges between civil society and competent public authorities. Education provides the building blocks for the future of society.

On behalf of the Government of France and in remembrance of all those affected by the tsunami ten years ago, the Embassy of France stands in solidarity with Sri Lanka.