"A call for Self-Restraint in the U.N."

“Waiving the right to veto in the event of mass crimes
” 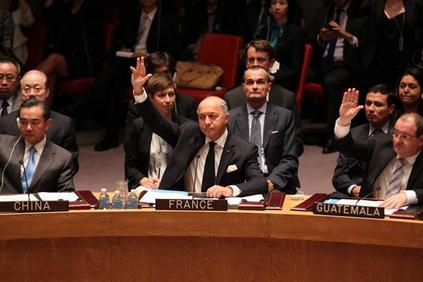 It has taken more than two years and 120,000 deaths in Syria for the United Nations Security Council to finally cease being paralysed by vetoes and make a decision.

France is dedicated to multilateralism and to the organization at its heart, the United Nations; this institution representing the main instrument of global political regulation in favour of peace and security. But a UN stalemate that lasts for two years, entailing dramatic human consequences, cannot be accepted by the universal conscience.

Progress has certainly been made during the 68th session of the United Nations General Assembly. We have reached an agreement on chemical weapons in Syria and opened the way towards a political solution. Discussions on Iran’s nuclear programme have resumed. France has contributed to these advances, specifying conditions for an acceptable resolution in the first case and responding to Iran’s willingness to engage in dialogue in the second. We have also raised the alarm, crucially, with regard to the Central African Republic, mobilized the international community in favour of stability and security in the Sahel, and worked on long-term multilateral issues such as climate disruption.

Yet these positive outcomes cannot change the fact that, for a too long time, the Security Council, constrained by vetoes, was powerless in the face of the Syrian tragedy. Populations were massacred and the worst scenario unfolded as the regime implemented large-scale use of chemical weapons against children, women and other civilians. For all those who expect the UN to shoulder its responsibilities in order to protect populations, this situation is shameful.

France is in favour of a more representative UN – in particular, through enlargement of the Security Council – but we are still far from reaching an agreement that would enable such progress. To avoid a loss of legitimacy, we must learn from the recent deadlocks to avoid running into such difficulties in future.

To this end, the French President has submitted an ambitious yet simple proposal to the United Nations General Assembly.

The suggestion is that the five permanent members of the Security Council themselves could voluntarily limit their right to veto. The Charter would not be amended and the change would be implemented through a mutual commitment from the permanent members. In concrete terms, if the Security Council were required to make a decision with regard to a mass crime, the permanent members would agree to waive their right to veto. The criteria for implementation would be simple: at the request of at least fifty Member States, the UN Secretary-General would be called upon to determine the nature of the crime. Once he had delivered his opinion, the code of conduct would immediately apply. To be realistically applicable, this code would exclude cases where the vital national interests of a permanent member of the Council were at stake.

I am aware that objections of all kinds can be made to this proposal. Let me counter them with a simple argument: a change such as this, so easy to implement, would allow us to preserve the fundamental credibility of the Security Council, which should be a pillar of peace and stability. It would convey the will of the international community to make the protection of human life a true priority. It would restore the power of discussion and constructive negotiation. It would avoid States becoming prisoners of their own principled positions.

Is there any other quick and effective way to make progress? I cannot see one. Today we have a window of opportunity. Let us seize it.