Home > A love story as only cinema can tell…

A love story as only cinema can tell…

The Sri Lankan cinema is dynamic, aesthetic and innovative. France has been able to recognise it and grant it place in the global selection it does every year through its numerous festivals and distribution channels.

This is perfectly illustrated with Mushroom by Sri Lankan director Vimukthi Jayasundara released in cinemas in February 2013 following his selection at La Quinzaine des Réalisateurs at the 2011 Cannes International Film Festival.

In 2005 The Forsaken Land by the same director was recognised at Cannes in the ‘Un Certain Regard’ selection and was awarded with the Gold Camera. The film was released in cinemas in France the following year.

This year two young Sri Lankan filmmakers were selected for the "Short Film Corner" at the 66th Cannes International Film Festival - Unforgiven by Sanjeewa Pushpakumara and There is no poetry here by Kalinga Deshapriya Vithanage.

Film Festivals in Sri Lanka also recognise successful directors and their films which have met with success in France.

With you, without you, the new film of Prassana Vithanage will be presented at the next European Film Festival in Colombo, in December. This film received the Gold Prize at the Vesoul International Film Festival, which it conquered by the "portrait of an intense and poetic" couple’s life that reflects "the ravages of conflict and civil war." 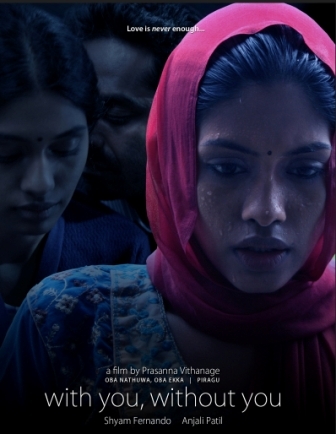 This is neither Vithanage’s first award at Vesoul nor the first for any Sri Lankan film maker. Vithanage’s new script is ready and the film may have a French producer.

Honouring and supporting Sri Lankan cinema, the French Film Festival held from the 11th to the 13th of July, was opened with Flying Fish by Sanjeewa Pushpakumara, a film acclaimed in 2011 in Nantes at the Festival of the Three Continents. This is a beautiful movie inspired by his youthful experience in Eastern Sri Lanka. He has just spent four and a half months in France at the Residence Programme of Cinéfondation of the Cannes Film Festival in Paris. This young talented director found a French producer, associated with two other European producers, to fund his next feature film based on the script he wrote during his stay in Paris: “Burning Birds is a film that came out scratching at my heart. It looks at myself, my mother and my country, through a microscope”.

Ending on a happy note …. the Alliance Française Foundation in Paris will present a “Sri Lankan Season” in 2014 during which many Sri Lankan artistes and movies will be presented in Paris. The future does look bright for Sri Lankan cinema in France and abroad….