« Agence Française de Développement » in Sri Lanka at a glimpse

Agence Française de Développement (AFD) is the French development finance institution that has been working to fight poverty and foster a sustainable economic growth in least developed and developing countries for seventy years. As a public entity, it executes the policy defined by the French Government.

In 2005, the French Government urged AFD to start operations in Sri Lanka in the aftermath of the Tsunami and to contribute to the country’s reconstruction. AFD mandate was extended in 2009 to enable it to pursue operations in Sri Lanka, with two main strategic objectives: promoting environmentally sustainable development policies and encouraging regional political stability. By 2012, AFD has already engaged USD 161 millions in loans, dedicated to public infrastructures. Today, AFD plans on financing infrastructures to support a green and socially inclusive growth in Sri Lanka.

Project 1: Rehabilitating infrastructure in the disaster area of Trincomalee

The tsunami disaster of 26 December 2004 caused catastrophic losses on two-thirds of the coast of Sri Lanka. Soon after, AFD decided to support the Government‘s efforts to rebuild and extend infrastructures through a major development project, which focused on the construction and rehabilitation of key public infrastructures in the district of Trincomalee, such as roads and bridges, water supply network, the distribution of electricity and community development infrastructure. Totally, AFD granted the Government of Sri Lanka a very concessional loan of 79 millions Euros.

On completion, 300 000 people will have access to water and 100 000 people will benefit from sewerage infrastructures, thus improving health, human and economic development. The project will also strengthen the capacity of local structures to protect and manage water resources. 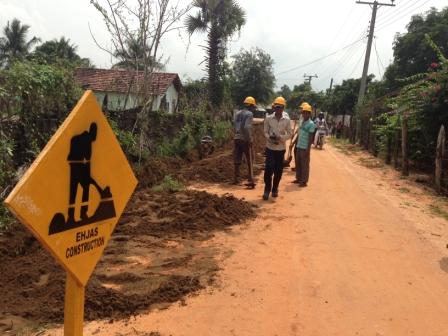 Project 3: Partnering with an association to structure the childhood education system