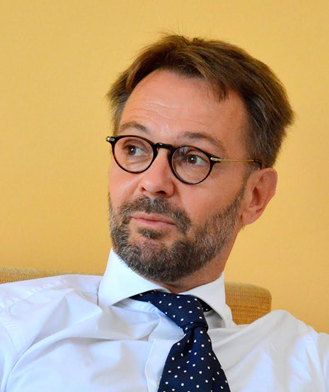 French Ambassador to Sri Lanka Jean-Marin Schuh is a specialist of Asia, specifically of China and South Asia. He is a fluent speaker of Chinese - although too modest to admit it, and has travelled extensively in South Asia and China - just for the love of experiencing the region to the fullest. He does not waste any time during his postings ; travelling and experiencing the cultures when work becomes less demanding. As for his curiosity for other cultures, is his love for art that decorates those cultures, making him an artist himself. Modest once again in his abilities at the piano, Jean-Marin Schuh makes up for the lost time back home in France, by playing at least once a day. There were two things that the French Ambassador did as soon as he arrived in Sri Lanka 10 months ago. One was to travel as much as possible before taking up duties, and the second was to buy a piano.

"I found it quite easy to buy a piano. It’s not so easy in other parts of the world," he said. But Schuh was quick to add that he is not that good. 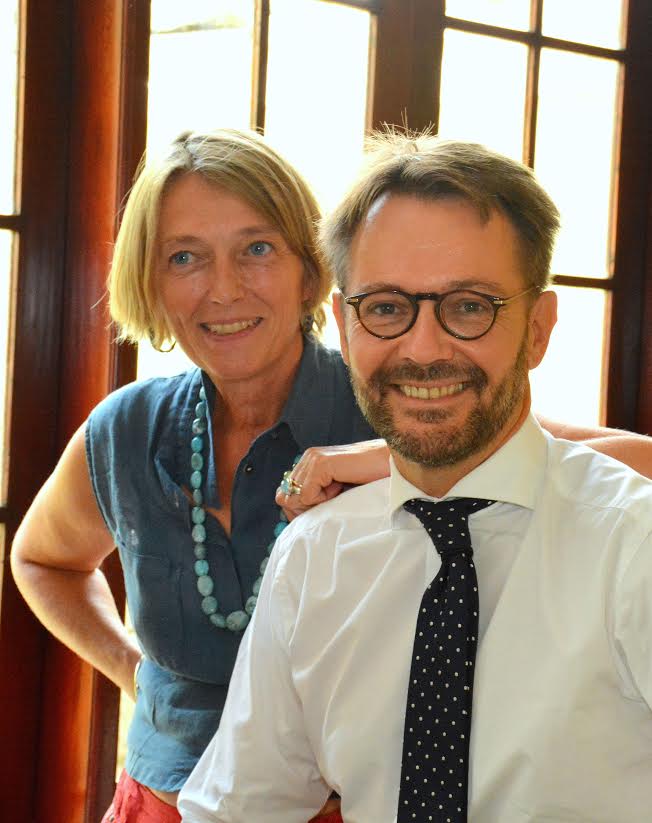 "It’s the same with foreign languages," he said. "I need to practice. You must play at least one hour a day. I don’t have one hour a day for the piano. That’s my problem," Schuh admitted.

Coming from Nancy, the former capital of Lorraine that celebrates art, culture and history, Schuh himself is a lover of the arts.Being brought up in a European culture, Schuh enjoys playing classical music with his favourite being French and Polish composer Chopin.

Apart from his passion as a pianist, his other passion is Asia and everything related to it. It is at exhibitions and museums that he spends most of his time when he is back home. His most frequented museum in Paris is Musee Guimet, which has one of the largest collections of Asian art outside Asia. Right now, he is where his heart is - South Asia - and he is quite at home.

"I am happy to be in Sri Lanka after India and Pakistan. I like South Asia very much, because of my oriental language training and Buddhism. I was very happy to be posted in a Buddhist country," Schuh smiled. 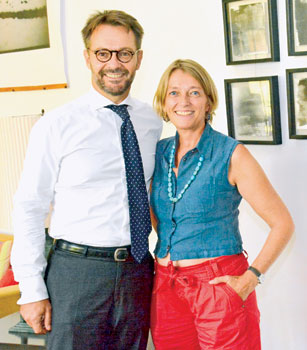 The French Ambassador with his wife Marie Caroline

Buddhism being a major part of Asian culture, Schuh said he has an interest in Buddhism at a personal level. "I’m curious about everything related to that part of the world - oriental languages and cultures, and of the philosophies coming from that part of the world." Being in China, Afghanistan and India has provided him with a glimpse of what it is to be a good Buddhist.

"I try to be benevolent. It is the first quality of a good Buddhist person ; to be benevolent towards people and animals both. I know where I want to go but I try to do it by being as benevolent as possible," he stressed.

Schuh added that he is interested in Buddhism, not out of ’faith,’ but at a more philosophical level.

"I’m interested in the philosophy than as a religion, which is good because Buddhism is a philosophy not a religion," he pointed out. Schuh has had links with Buddhism and Sri Lanka while he was in Afghanistan where he says he had one of the most memorable experiences in his career. During a one day trip by car, through two passes and conquering the snow and landmines, Schuh had been able to visit one of Buddhism’s most ancient symbols - the Bamian statues. Awed by its grandeur and history, Schuh said it is horrific that Bamian statues were destroyed, calling the act ’utter nonsense.’ He said he was saddened that he saw only the remnants of the ancient statues. "Afghanistan changed me. It was harsh since I left my family and came to Afghanistan alone," Schuh added. But the benefit of being a diplomat is reflected on his children as they have taken travelling with their parents as an opportunity to become ’global citizens’ themselves.

"Two of my kids started Chinese. They speak very fluently. That is a good consequence of staying abroad," Schuh pointed out. A father of four, Schuh’s eldest daughter has taken his path learning Chinese and following a political science course in Beijing. Although the French Ambassador represents all that is French, be it the cuisine, art, music and the French taste in everything, Schuh is also a ’global’ person, who likes to experience the world.

During the 10 years he spent in China, he had been able to travel extensively, as his travels within India and Pakistan.

Unsurprisingly, the first thing he did before taking up duties in Sri Lanka was to discover the country.

"Regarding sports, the two things I like is diving in the sea and hiking in the mountains. I have done both here," he said excitedly.

"I experienced diving at Mirissa and hiking at Ella," Schuh smiled, adding that the three to four hour trek between Kandy’s Three Temple Loop : Ambekke, Lankathilake and Gadaladeniya,was the most interesting. He had already covered the coast and hill country including the Sinharaja forest and Yala National Park, and looks forward to covering the North and East as well. But his favourite place is the hill country where he says reminds him of his home.

His home in France is not a big apartment in Paris. Rather, it is in the Alps where he is able to appreciate the beauty of the mountains and nature’s wonders up close.

His love for the mountains is translated here in his love for tea estates and tea in particular. With a 10-year experience in Chinese green tea, Schuh has become an avid tea-drinker, consuming countless numbers of tea a day. "I drink a lot of tea all day long. I love black tea without sugar. There’s always a pot of tea at my desk," he added with a smile. He is quite happy with Lankan spices as well, due to his 10-year experience in South Asia.

"I know my compatriots may have problems with chili but I love spices. My favourite is sea food and stuffed crab with plenty of savours and spices," he added. Without hesitation, Schuh added that his love for food is his guilty vice.

Schuh is driven by his curiosity for the outside world. He believes that one is more alive the more curious he or she is, and this is the philosophy he lives by. Thus, he says he tries to escape his residence as much as he can. His hope is to be an ambassador interested in the country and to be in touch with the people rather than living in an ivory tower, which is why he even plans on learning Sinhala while being in Sri Lanka. "I will start Sinhala lessons before March. At least one hour of Sinhala a week. It is not to speak fluently but to pronounce some words correctly. It is always useful if and when I come back here," he added optimistically. With his wife, Marie Caroline being a photographer, Schuh already has a large collection of snapshots of Sri Lanka. He plans on taking all of this back to the Alps. "But for sure not the piano. I already have three pianos at home," he smiled.

It is indeed too soon to talk of going back but it is not too soon to start collecting. This maybe another principle that Schuh lives by, as he already has a collection of various tastes of tea and antiques from Sri Lanka, apart from the many memories frozen in time in Caroline’s images. 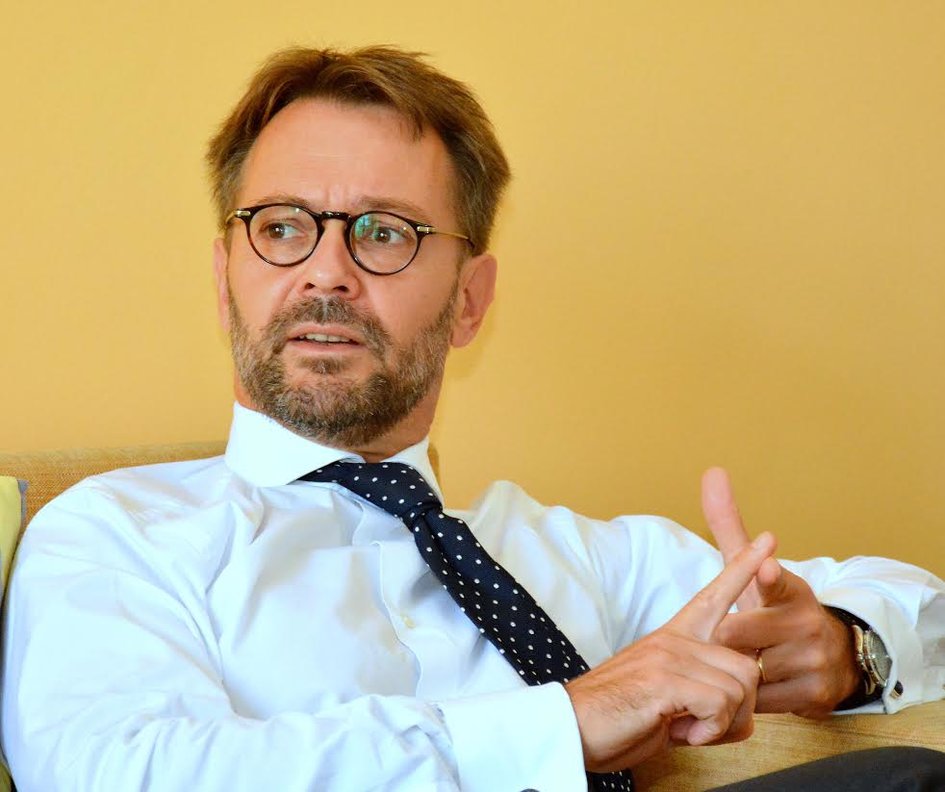