Ambassador of France’s Visit to the Northern Province

The Ambassador of France to Sri Lanka and the Maldives, H.E. Mr Jean-Paul Monchau, was on an official visit to the Northern Province between the 9th and the 11th of March 2014. In Jaffna, H.E. Mr Jean-Paul Monchau held a meeting with the Governor of the Northern Province, Mr G. A. Chandrasiri and was provided with detailed information about the changes that have occurred since the end of the war, in particular in terms of advances made in the fields of rehabilitation, reconstruction, infrastructure as well as about initiatives taken by the government in terms of the economic development of the province. 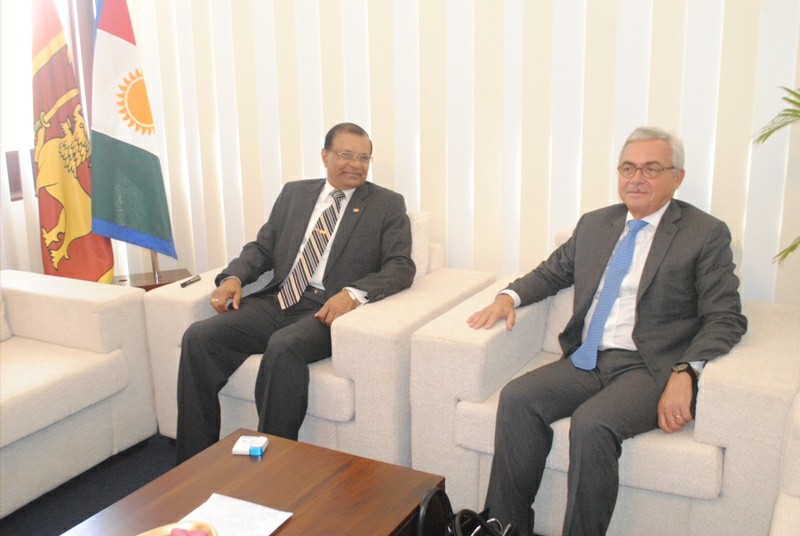 During an interview with the Chairman of the Northern Provincial Council, Mr C. V. K. Sivaghanam, the Ambassador had the opportunity to discuss the issues relating to land ownership, the functioning of institutions and the politics of language. Mr Sivaghanam reiterated the hope of the population to continue to live in peace with dignity and with respect for its identity. These questions were also brought up spontaneously by representatives of Jaffna’s civil society over a lunch meeting to which the Centre for Women and Development, the Social Organisation for Networking Development, the Red Cross, Caritas and Sarvodaya North were invited by the Ambassador. On the occasion of a visit to the newspaper Uthayan, the Ambassador congratulated the editor-in-chief, Mr Kanamailnathan, for winning the International Press Freedom award given by the French organization “Reporters without Borders” and discussed press freedom. 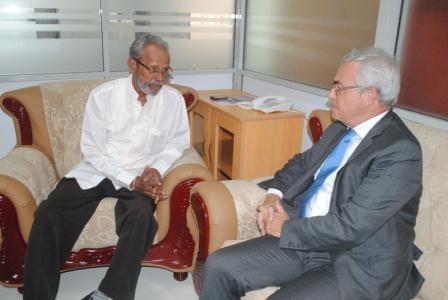 In Kilinochchi, the Ambassador met with the Government’s Agent, Ms R. Ketheeswaran and discussed the situation of the district’s population, including the construction of housing for the vulnerable populations, effort made to improve the situation of women and more specifically that of widows as well as all measures taken with regards to children’s schooling. While recognizing all that remains to be done and the gaps to be filled, the G. A. highlighted the major changes that have occurred in the district since 2009.

During exchanges with the province’s elected officials, the Minister of Health of the Northern Provincial Council, Mr Sathiyalingam, insisted on the lack of doctors and of other qualified staff in the 100 hospitals of the Northern Province and specifically mentioned the situation of the disabled and special needs category of the population. He also brought up the issue of malnutrition which continues to affect large numbers of children. This issue was also taken up by the Minister of Education, Mr Gurukularajah who expressed his concern that malnutrition affects the schooling of children from marginalized households. The Minister informed the Ambassador of the lack of Mathematics and English teachers in schools which hinders the implementation of policies for the teaching of languages.

The Ambassador expressed his view that reconciliation can only be carried through by the will of all Sri Lankans themselves, in the setting of a united country and with the help of cooperation partner countries.