Ambassador of France’s visit to the Eastern Province

The Ambassador of France to Sri Lanka and the Maldives, H.E. Mr Jean-Paul Monchau, was on an official visit to the Eastern Province between the 12th and the 14th of March 2014. The Ambassador of France was received at the Trincomalee naval base by the Rear Admiral A.R. Amarasinghe, Commander of Eastern Naval Area for a meeting with the presence of several naval officers. The discussions were followed by a visit of the Trincomalee harbour, including a passage through the “French Pass”, a reminder of the brief period when France possessed the Fort of Trincomalee between March and July 1672. A guided tour of the Navy Museum allowed for the Ambassador to grasp the history of the Sri Lankan navy, especially the more recent history with the victory of the governmental forces over the LTTE.

During a meeting with the Chief Minister of the Eastern Province, Mr Najeeb Abdul Majeed, the two officials discussed the situation in the East and the functioning of provincial institutions in relation with the central government. The Chief Minister reminded the French envoy of the role played by France in the immediate aftermath of the 2004 tsunami. He also mentioned his desire to encourage economic development in the Eastern province, especially through tourism and the renovation of road infrastructure by the government. Mr Majeed presented the educational project named "Formalizing the Preschool Education System in the Eastern Province" which aims to makes the field of early childhood education the responsibility of the Provincial government, as per the 13th Amendment.

France is already involved in the field of Preschool education in the Eastern Province, as the Ambassador could witness during the visit of the French NGO Solidarité Laïque’s project in Kinniya with the local project managers. The Ambassador then went on to inaugurate a Resource Centre built by the same NGO for the protection of early childhood development, with the presence of about 50 preschool teachers. The Ambassador distributed appreciation awards in the presence of the National Coordinator of Solidarité Laïque as well as an official of the Ministry of Education. This project, which aims to improve the capacities of preschool teachers, is financed by the French Agency for Development (AFD) with the amount of 78 million rupees for the 2012-2015 period, following a first funding amounting to 32 million rupees between 2008 and 2011. 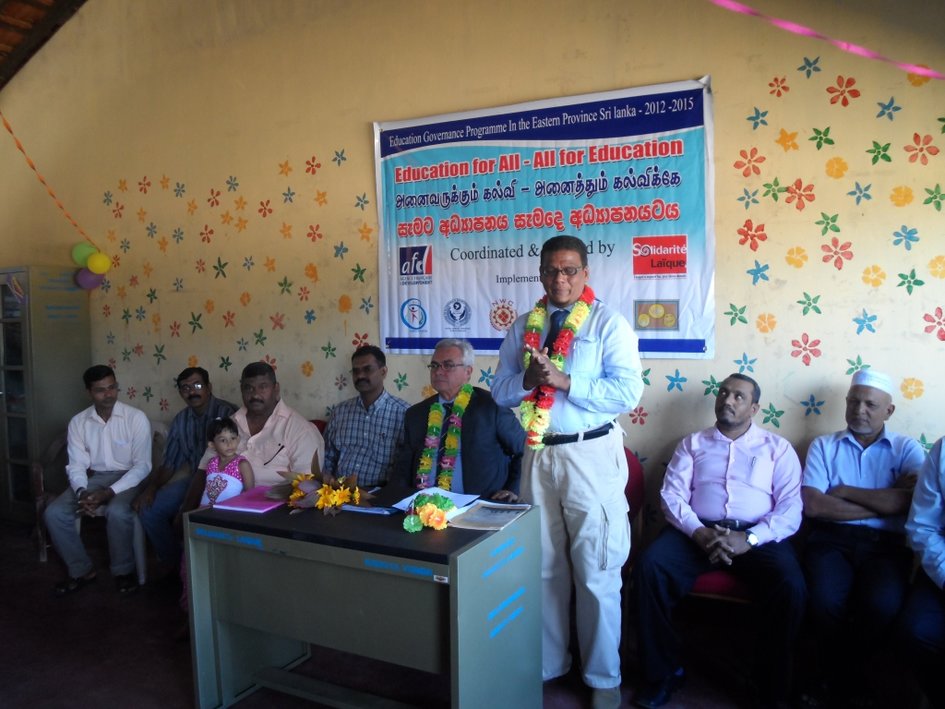 In the field of economics, Mr Monchau met with the directors of the Trincomalee Chamber of Commerce in order to better understand the strengths and weaknesses of the region in the face of challenges for its development. In Kantale, the Ambassador visited the Kantale Water Treatment Plant, which is in its final stages for completion and which has been implemented by the Water Board along with French companies, namely VINCI Construction and Société du Canal de Provence with the financial assistance of the French Agency for Development (AFD).