The European Union Delegation in partnership with several European Cultural Institutions and Diplomatic Missions in Colombo including the French Embassy and the Alliance Française will officially launch the European Film Festival 2013 on Thursday November 28th 2013 (opening night on invitation only). 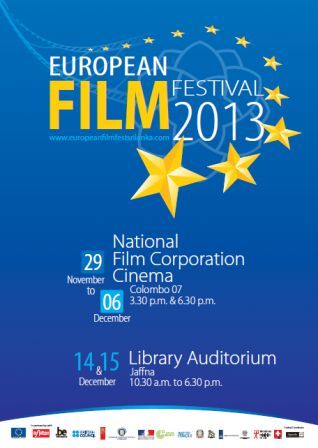 This is the sixth consecutive year that this festival is taking place in Sri Lanka and this year the organising committee is chaired by the European Union Delegation in Colombo and coordinated by Agenda 14. Like in the past, the National Film Corporation of Sri Lanka too joins hands as a partner of this year’s European Film Festival.

17 recently released and highly acclaimed films from Belgium, Denmark, Finland, France, Germany, Italy, The Netherlands, Poland, Sri Lanka, Switzerland and The United Kingdom will be screened this year. The festival in Colombo will be open for the public from 29 November to 06 December 2013 with screenings each day at 3:30 p.m. and 6:30 p.m. at the NFC Cinema, Colombo.

Thereafter the festival will travel to Jaffna. In Jaffna, selected 6 Films will be screened at the Public Library Auditorium on 14 -15 December 2013.

This festival is a shared international cultural experience that aims to promote a friendly relationship and to increase the mutual understanding between European Nations and Sri Lanka.

And for more informations : http://www.europeanfilmfestsrilanka.com/