Launch of the fourth edition of the French Spring Festival!

On the 27th of May, Mr Jean-Marin SCHUH, Ambassador of France to Sri Lanka and the Maldives, announced the opening of the French Spring Festival 2015 during a press conference at the Galle Face Hotel with Mr Bernard WASANTHA from the Ministry of Cultural Affairs of Sri Lanka, Mr Antony G. PATON, General Manager of the Galle Face Hotel, Mr Anil BANDARA, Representative of Jet Airways, Mr Michel TREUTENAERE, Counselor for Cooperation and Cultural Affairs, Embassy of France to Sri Lanka and the Maldives and Ms Dinusha Ileperuma, media coordinator. 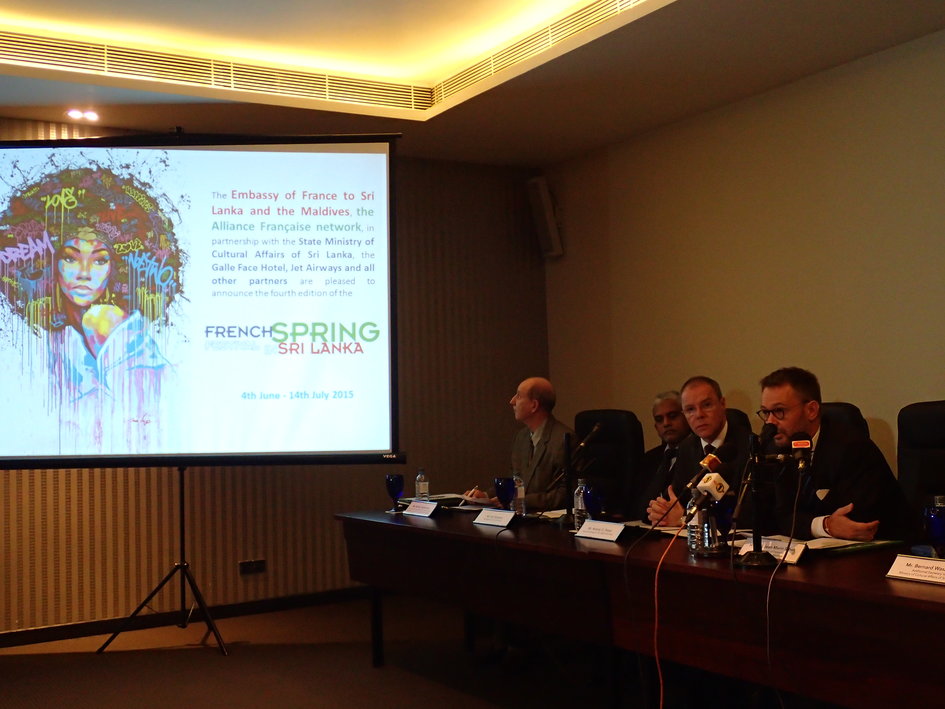 The FRENCH SPRING FESTIVAL is a major multi-disciplinary festival celebrating arts and culture organized by the Embassy of France, the Alliance Française network in Sri Lanka and the Maldives, in partnership with the State Ministry of Cultural Affairs of Sri Lanka, the Galle Face Hotel and Jet Airways with the support of a number of French and Sri Lankan companies.

The fourth edition of the FRENCH SPRING FESTIVA will be held from Friday 4th June to Tuesday 14th July with the participation of French and Sri Lankan artists. The festival will be held in various venues in Colombo including Galle Face Hotel, BMICH, National Art Gallery, National Film Corporation, Lionel Wendt Gallery, Lanka Institute of Fashion Technology and Deanna School of Dancing. A variety of key events promoting cultural exchange will also take place in Kandy, Matara, Galle, Jaffna and Male’ in the Maldives. Most events of the festival will be free of charge and open to all. On the occasion of its fourth edition, the FRENCH SPRING FESTIVAL presents urban art and design exhibitions, a choreographic ballet and stars various music groups including a French world music band: Sonith, for the most-renowned Fête de la Musique. Cinema will also celebrate cultural diversity through animated movies. French film director and writer Marguerite Abouet will present her movie Aya de Yopougon. The French graffiti artist Noé Two will invade public space with colourful art works in several venues on the island.

Exceptionally this year, in the lead up to the 21st Conference of the Parties on Climate Change (COP21), to be held in Paris from the 30th of November to the 11th of December 2015, the organizational committee of the FRENCH SPRING FESTIVAL is glad to contribute to the worldwide debate on climate change. A diversity of solutions allowing to respond to the challenges of climate change will be presented through a forum, debates and the exhibition “60 Solutions Against Climate Change” by the French photographer Yann Arthus-Bertrand.

The Embassy of France gives special thanks to the Ministry of Cultural Affairs of Sri Lanka, the Galle Face Hotel, official hotel partner, Jet Airways, official airline partner and all other partners for contributing to the great success of this fourth edition.