Q : What are your comments on the France-Sri Lanka friendship ?

A : We are very much willing to upgrade our political relationship with Sri Lanka. We are honoured that President Maithripala Sirisena went to France for the COP 21, the Climate Change Conference. He was there at the Heads of State meeting. We hope to see more political visits in the coming months both ways – Sri Lankan visitors to France and French visitors to Sri Lanka. We are also willing to develop economic relations with Sri Lanka.

Q : What development assistance has France given to post-conflict Sri Lanka ?

A : Our main operator in Sri Lanka is the French Agency for Development (AFD). They started to work in Sri Lanka in the aftermath of the 2004 tsunami with post-tsunami projects worth 90 million Euros. That was focused on the Trincomalee District, since it was the most affected district in Sri Lanka. That was mainly the financing schemes and that went through the Central Bank of Sri Lanka. The main loan was for rebuilding bridges, roads, community buildings, electricity power lines and restoring water pipelines. These main loans were granted at a very concessional rate.

Small loans were given for early childhood development programs by the French NGO called Solidarity, which worked in the Eastern Province. These projects were started in the aftermath of the tsunami and completed in 2010.

After 2010, the AFD started to develop new programs focusing on a new mandate which is called ‘green and sustainable development’. 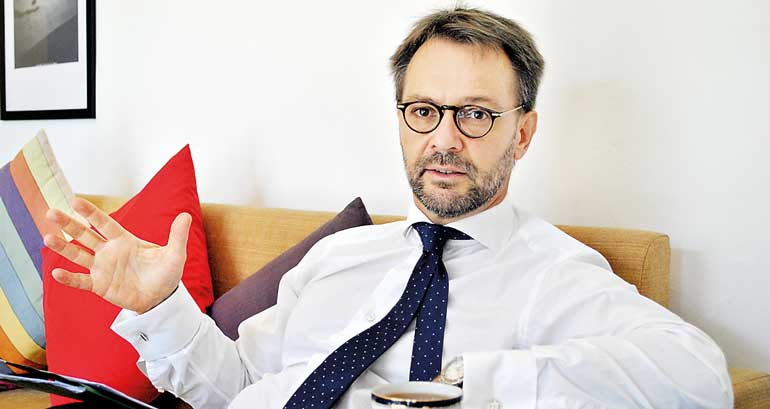 Q : Demining is one area that France is helping Sri Lanka in. What is the progress ?

A : A few weeks ago, Sri Lanka announced that it is considering acceding to the Anti-Personnel Mine Ban Convention and might do so in 2016. This is great news. We know that there were more than 2,000 acres of land to demine immediately after the war and the remaining is nearly 60 acres of land to be demined. That is also great news. We encourage Sri Lanka to be a party to the Convention on Cluster Munitions as well. We took note of the declaration on the occasion of the first review conference in Dubrovnik (last September) that Sri Lanka has neither possessed Cluster munitions stockpiles, nor used this weapon.

Q : How do you evaluate the progress in development in post-conflict Sri Lanka ?

A : France congratulates Sri Lanka for signing the Convention on Enforced Disappearances. This is a very important step towards the path to reconciliation. We also noted the commitment of the Government of Sri Lanka on human rights and settling the consequences of the war. The fact that Sri Lanka was co-sponsor of the resolution on human rights at the Human Rights Council in Geneva in September was good news. This is very important.

We have also noted the promise was made to amend the Prevention of Terrorism Act. France is happy about the number of former LTTE cadres released recently and the progress made to hand over the land seized during the war. All these elements are going in the right direction and we will follow closely the mechanisms to be set up in the coming months regarding reconciliation and justice.

Q : What are your comments about the bilateral trade relations between the two nations ?

A : We have to develop more trade relations with Sri Lanka. In 2014, the total bilateral trade amounted to more than $ 600 million and this year it will reach almost $ 750 million. This is not enough and this has to be developed, in both ways.

Exports from France to Sri Lanka consists mainly of Airbus aircraft. Three Airbuses of A330 have been delivered to Sri Lankan Airlines, one in 2014 and two in 2015.

Apart from this, our exports are mainly driven by the electronic products, perfumes and cosmetics for the hotel industry. The imports from Sri Lanka are mainly textiles. One of the main importers is Decathlon, the famous sports brand in France. It imports around $ 100 million every year. Garments, textiles, mineral, rubber, spices and tea are imported from Sri Lanka. So, there is room for improvement in our bilateral trade.

Q : What are the new areas that France hopes to step into assist Sri Lanka in the future ?

A : First, we hope to consider smart cities and everything related to urban development, because this is the sector where French companies have huge expertise. So, everything related to urban development, starting from water to transportation, will be looked into. We have expertise in water supply, water sanitation and waste management. We will also look into transportation, especially urban transportation. We have developed software for high speed trains in France. We have developed light trains in our cities. This is much more efficient than buses. French companies have expertise in equipment and design.

In the sector of aeronautics, our companies have expertise in air traffic management. I will try to promote small airplanes, which can be appropriate for Sri Lanka to develop its domestic airlines between Colombo, Jaffna, Trincomalee and Batticaloa. Our companies are also interested in the food sector, including French wine and tourism, management of hotels and restaurants.

AFD has started an important project in urban development in Anuradhapura, which promotes an integrated approach that will also pay attention in preserving local heritage and developing tourism and infrastructure, especially water supply.

For the future, AFD has been requested to investigate on new development fields like urban transportation, sustainable forest management and eco-fisheries. 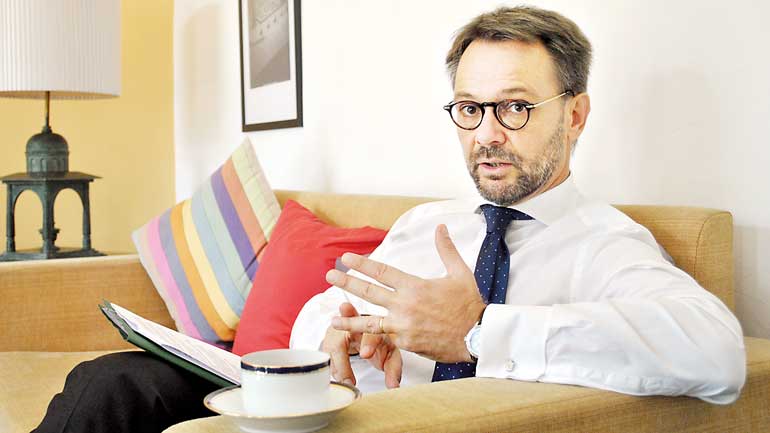 Q : People in the North Central Province have been badly affected by chronic kidney disease (CKD). Do you have any plans to commence a project to help these people, since you have expertise in the water sector ?

A : This is why AFD is focused on water supply and wastewater management, because CKD is very much connected to the problem of water. Firstly, we have to know how CKD is developing and what the main factors that contribute to the rapid spreading of CKD in the North Central Province are. Then, we have to treat the water and we have to start treating people.

Q : What needs to be done to increase the flow of French tourists into Sri Lanka ?

Q : Why do you think more and more French tourists are coming to Sri Lanka ?

The good news is that the annual convention of the French Association of Travel Agents will be held in Colombo, this year. This is the first time that this kind of a meeting will be held overseas. This is a sign that Sri Lanka is a popular destination in France.

As the Ambassador of France in Sri Lanka, I am also keen in popularising France as a tourist destination for Sri Lankan tourists. One of my priorities is to increase the number of Sri Lankan tourists going to France. At present, Sri Lankan tourists are mainly pilgrims who are going to Lourdes. I want to show them new, wonderful destinations as well. Our natural and cultural heritage is outstanding and I also want to promote the wine regions and the river cruise tourism. And as trips start with a visa, in order to facilitate the Sri Lankan tourists to France, we have streamlined the visa process and now we issue visas within 48 hours.

Q : Sri Lanka has maintained good defence ties with France. What kind of military assistance can France offer the Sri Lankan military in the future ?

A : France is very keen to develop military to military ties with Sri Lanka. Recently, Admiral Beaussant, the Chief Commander of the French Forces in the Indian Ocean, took part in the Galle Dialogue and we met the tri-force commanders and the Chief of Staff. We expect a call by a French ship in the coming months in Sri Lanka and we would also like to have officers in our military schools visit Sri Lanka in the coming months.

Q : You were in France, participating in the Climate Change conference soon after ISIS attacked Paris. How is France coping after the deadly terrorist attack ?

A : We were attacked by people who despise what France is – a country with freedom of speech and freedom of thought. We have our own way of life and it was targeted. I would like to quote the French President on this, when he made an address to the French Congress. He said that “France is strong and even though we may have been wounded, we will bounce back. Nothing will be able to hurt us. France is solid and it is active”. What I can say is France is back to normal and we will keep our way of life.

Q : How successful was the Climate Change Conference and what are the resolutions adopted for the benefits of developing countries like Sri Lanka ?

A : We were very happy to host the COP 21 – the Climate Change Conference. It was a political and a logistical challenge for France, since we welcomed over 40,000 delegates and visitors to Paris. It was a very successful conference, with the agreement on global warming. This agreement ushers in an energy revolution, a very concrete revolution : we will keep global warming well below two degrees and continue with our efforts to limit the rise to 1.5 degrees. This is the first objective.

The second is that rich countries will provide $ 100 billion from 2020 annually to developing countries. This figure will be updated by 2025.

The third objective is that developed countries should continue to take the lead by undertaking economy-wide absolute emission reduction targets. The developing countries should continue to enhance their mitigation efforts, and are encouraged to move over time towards economy-wide emission reduction or limitation targets according to their different national situation.

The fourth resolution is to reach the global peak of greenhouse gas emissions as soon as possible, and to undertake rapid reduction. It means reaching net zero emissions after 2050, so as to achieve a balance between emissions and removals by the second half of this century.

The fifth point of the agreement is that these targets will have to be reviewed every five years starting in 2023. This is also very important, as it will help to adapt countries’ national objectives with a view to upgrade their contribution to the reduction of emissions but not to diminish it.

There is a climate risk and damage recognition especially for small countries which have already been affected by climate change.

Q : What are your views on the GSP plus issue and EU’s ban on fisheries on Sri Lanka ?

A : Trade issues are processed by the European Commission on behalf of the European countries. First, we welcome Sri Lanka’s wish to formally request for the GSP plus benefit. Sri Lanka needs to comply with a number of requirements, among which is compliance with international conventions on human rights. We support the efforts of the Sri Lankan Government on this matter and hope that this issue will be settled shortly. We have noted that the dialogue on human rights with the EU will resume shortly.

For the fisheries ban, it is the same. It is processed by the European Commission. We hope that Sri Lanka will shortly get the benefits of exporting fish and seafood to EU countries.

Text and pix by Shanika Sriyananda