Saturday, 11 October 2014, Colombo, Sri Lanka. The French-Sri Lankan Conference on Higher Education was inaugurated jointly at the Kingsbury Hotel in Colombo by H.E. Jean-Paul Monchau, Ambassador of France to Sri Lanka and the Maldives and Hon. S. B. Dissanayake, Minister of Higher Education. 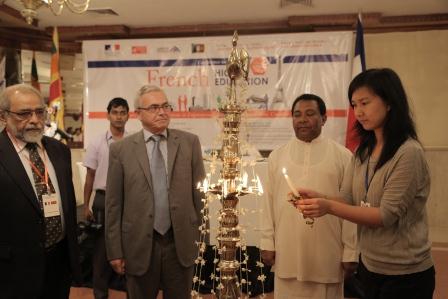 This Conference was organised by the French Embassy to Sri Lanka, Campus France - the French National Agency for the promotion of higher education, international student services, and international mobility, and the Alumni of France – Association of Former Sri Lankan Students in France (ASLAEF) with the collaboration of Alliance Française de Kotte in Colombo.

Addressing participating institutions and other distinguished guests, Chief Guest Minister Dissanayake congratulated the organisers and the French delegation of 15 schools and private institutes and consortiums representing over 80 higher education institutions for initiating contacts for future partnerships between French and Sri Lankan higher education institutions, and bringing the Student Fair to Sri Lanka for the first time.

The large choice of qualifications and institutions of excellence in various fields including the Engineering sector, Business administration and Arts, including Fashion, and Design.

The equality of treatment in France of students from France and from other nationalities, where the cost of higher education in the public sector in France is highly subsidised in the public universities (85 universities across the country). Up to 95% of tuition fees are taken care of by the French Ministry of Higher Education.

The existence of over 700 Masters and specialised degrees, fully taught in English. As a Sri Lankan student, these courses are extremely interesting as knowing the French language before-hand is not a pre-requisite. Learning French before going to France can be an added advantage. French courses are available in the public and private sector of Education in Sri Lanka, and at the Alliance Française de Kotte in Colombo and its branches situated in Kandy, Matara, Galle and Jaffna.

Meetings were organised the same afternoon between French higher education institutes and representatives of Sri Lankan universities, private institutes and international schools. Among them, two institutions recently signed agreements: University of Moratuwa with consortium of 70 French Institutes of engineering “nplusi” (in August 2014) and LIFT with Mod’Art International (10th October 2014) 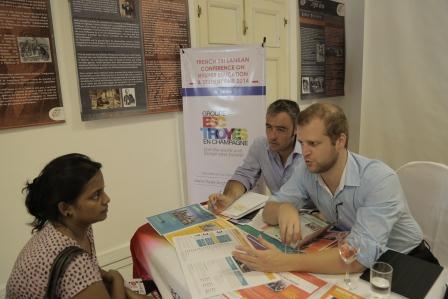 Minister Dissanayake, in the company of the Ambassador of France Jean-Paul Monchau and the representative of Campus France Head Office in Paris, Mr Bastien Palermo-Chevillard, also launched the new website in English - www.srilanka.campusfrance.org - providing all useful information required for finding a suitable program to student visa guidance.

This French-Sri Lankan Conference on Higher Education and meetings with French higher education institutions was been parallely organised with a “Learn French-Study in France” Open Day for students and their families at the Alliance Française de Kotte, the only Official Alliance in Colombo and situated at 11, Keppetippola Mawatha in Colombo 05. This provided a special occasion for students to widen their horizons about choosing France for higher education purposes. 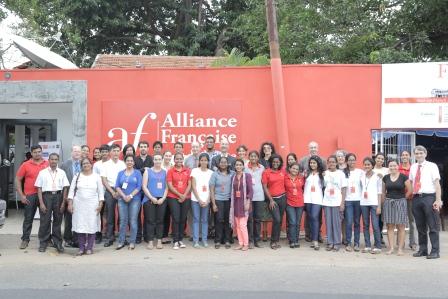