Home > French support to the global fund to fight AIDS, Tuberculosis and (...)

French support to the global fund to fight AIDS, Tuberculosis and Malaria [fr]

The annual meeting of the board of the Global Fund against HIV, malaria and tuberculosis which was held in Colombo from June 17th to June 19th 2013 provides a good opportunity to shed lights on this innovative facility.

In 2002, the international community, in recognition of the seriousness of the HIV/AID, tuberculosis and malaria pandemics, decided to create a dedicated Fund for these diseases. The Global Fund aims at collecting, managing, allocating and controlling financial additional resources available, so as to reduce the number of infections, morbidity and mortality of these pandemics. As a truly financial instrument putting forward the principles of participation and national ownership, the Fund channels the money to the most adapted local structures, gathered in a Country Coordination Mechanism (CCM) which comprises government representatives, people from the private, academic, and associative sectors, multilateral and bilateral donors , as well as representatives of the affected communities. Since its creation in 2002, the Fund has become a major player worldwide, channelling 82% of international funding dedicated to the fight against tuberculosis, 50% of those going to malaria and 21% of the ones against HIV. With 95% of its budget emanating from the voluntary contributions of 54 States, and 5% from the private sector, it is estimated that the Fund has allocated more than 26 billions USD worldwide since 2002. France’s participation to the fund has been constantly growing since 2002 to 480 millions USD a year in 2012/13, making the cumulative sum of its contributions to the Fund reaching 3,3 billions USD, representing 14% of the funds allocated worldwide. This makes France the second biggest donor. 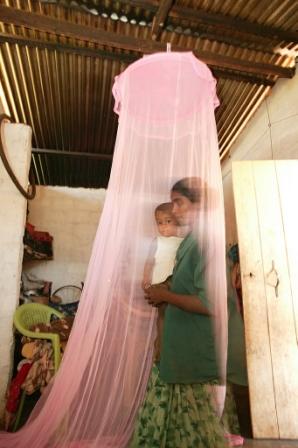 The global fund in Sri Lanka

If the number of recipient countries of the Fund has grown to 151 countries today, Sri Lanka was one of the first countries receiving funds since the inception of the facility. From 2002 to 2013, 48 millions USD- of whom 58% was allocated to the fight against malaria, 24% to the fight against tuberculosis, and 18% against HIV- have been disbursed in Sri Lanka, with French contributions amounting to 7, 8 millions USD. Thanks to these, Sri Lanka is one of the four Asian countries receiving grants from the global Fund, which has entered the “pre-elimination” stage for malaria, the phased elimination of malaria in the country being planned at the end of 2014. More than 1.1 million insecticide-treated nets had been distributed by the end of 2010. The latest Global fund HIV programme aims at scaling up preventive interventions to 14 districts in Sri Lanka, providing care and treatment to people living with HIV, and to generating strategic information necessary for HIV response in Sri Lanka.