Home > Higher education in France: a new world of opportunities

Higher education in France: a new world of opportunities

Each year, more than 278,000 young foreigners from all over the world choose to study in France, which makes it the fourth most popular destination for international students in the world. This is due to several comparative advantages of the French higher education system. 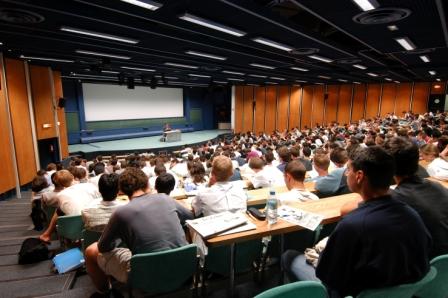 French institutions figure prominently in the Shanghai Classification of Universities, and the rankings of the Financial Times and Times Higher, thanks to massive investments in education and research, representing nearly a third of the French government budget. Furthermore, since French higher education employs the “LMD” system (Licence, Master, Doctorate) now used throughout the European Union, student mobility within Europe and around the world is made easier.

Annual registration fees in public institutions are low, to encourage everyone to get education. Set by law, they range from € 181 for bachelor’s programs to € 596 for programs leading to an engineer diploma in 2012-2013. The equal treatment for both domestic and international students means that all of them pay the same fees, the government bearing the largest part of the cost of education (an average of 10,000 € per student per year) and all of them are entitled to the same benefits (health coverage, housing assistance).

It is no longer needed to be fluent in French to study in France since Campus France catalogue of postsecondary programs taught in English includes nearly 750 programs designed for English speaking students. These programs cover humanities, languages, literature, arts and design, law, sciences, environment, health science, mathematics, engineering, technology, architectures, economics, tourism, business and management, agriculture and so on... French Language courses are included in the program which is an additional asset for anyone wishing to have an international career. Promoting French higher education and professional training abroad is the mission of Campus France Agency. Anyone wishing to explore the possibility of studying in France can visit www.campusfrance.org, http://srilanka.campusfrance.org or write to colombo@campusfrance.org.