On the 8th of March 1975, the United Nations began celebrating International Women’s Day (IWD). Since then, worldwide, Women continue to contribute to social, economic, cultural and political achievement but progress towards gender parity has slowed in many places. International Women’s day 2016’s Campaign theme is Pledging for parity! to promote concrete step to help achieve gender parity more quickly and help women and girls to achieve their ambitions. 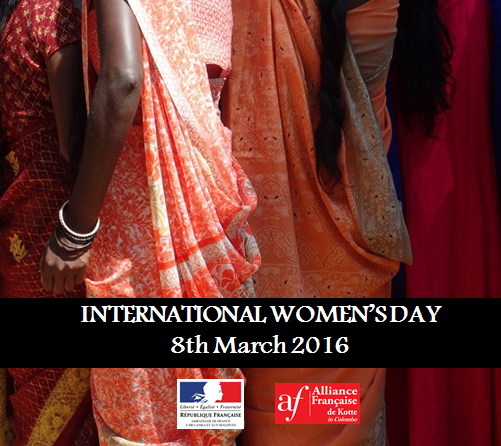 On the occasion of International Women’s Day 2016, the Embassy of France in Sri Lanka and the Maldives has partnered with the the Alliance Française de Kotte to organize a special evening celebrating Women.

The documentary « Femmes du Monde » by Marc Jampolsky, based on the Work of Titouan Lamazou, UNESCO Artist for Peace will be screened and followed by an open discussion on women’s rights and gender parity.

The event will take place on the 8th March 2016 – 6.00 pm onwards at Alliance Française de Kotte in COLOMBO, No 11, Keppetipola Mawatha, Colombo 05 (Behind the Police Park in Thimbirigasyaya)

For further information, have a look at here