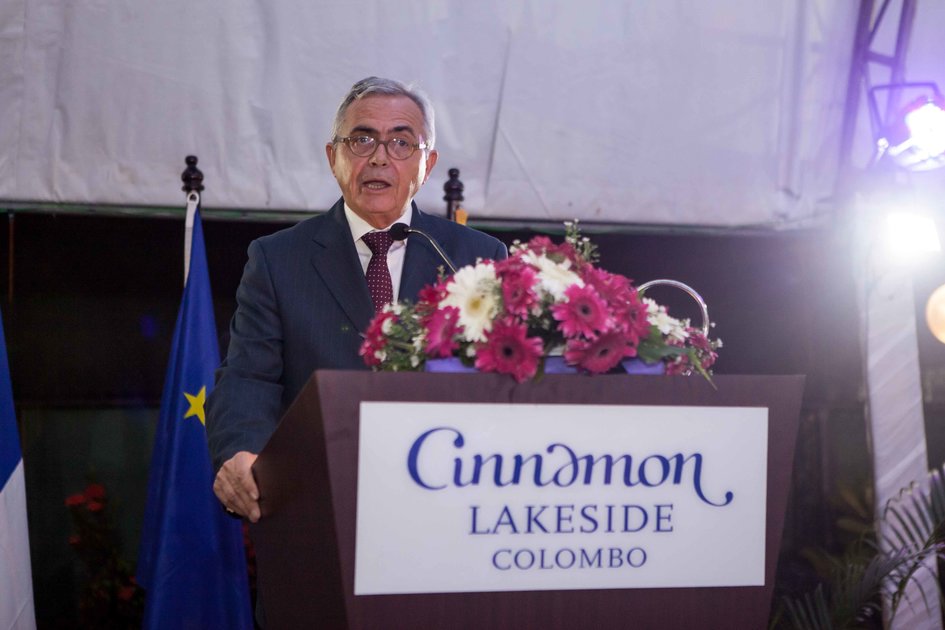 I thank all of you for your presence tonight on behalf of the team of the French Embassy who made this event possible. We truly appreciate your friendship and your support.

The history of France is very rich and has included much suffering for its people if you consider the conflicts, wars and revolutions the French people had to face. Today, we enjoy peace and stability inside the European Union, which constitutes a unique political endeavour.

Upon arriving in Colombo in September last year, I was impressed by the resilience the Sri Lankan people showed despite having suffered three decades of civil war as well as the tsunami of 2004. The rapid transformation of Colombo, the development of infrastructure across the country, including in the devastated provinces of the East and the North, the resettlement of hundreds of thousands of internally displaced persons, the rehabilitation of ex-combatants; all contribute to a brighter future in this country. Today, Sri Lanka is one of the most successful countries in South Asia, according to social development indicators.

Obviously, today, the most important issue for Sri Lanka is reconciliation between the country’s communities. France and the European Union are very attentive to this issue because as friends of the Sri Lankan people, our countries really hope to see progress in this field to ensure that war will never take place again. Reconciliation imposes efforts to be made by everyone, not only by the government, but also by the majority and opposition, by civil society, by religious leaders and by all stakeholders concerned. There is no other possibility to maintain a peace which was so difficult to achieve. I must say, reconciliation does seem possible when you see that here, in Colombo, all communities live in harmony, all religions are respected and all three languages are taught and spoken…

Since the end of the war, the Sri Lankan economy has been growing at great speed, at a rate of 6 to 8% a year, which would be a dream come true in any Western economy. I am convinced that France can participate in the economic and social development of Sri Lanka and that is why, I will focus on economic diplomacy during my term.

The Agence Française de Développement (the French Agency for Development) and its private sector branch PROPARCO are now collaborating with the ministry of finance and various banks and agencies in the country in the fields of urban development, water, waste management, transport, energy etc… The presence of French companies in Sri Lanka is what strengthens our economic ties: Airbus, Alstom, Boccard, Bouygues, Degrémont, Delifrance, Eiffage/Matières, Lafarge, Noyon, Véolia, Vinci… are but a few of those who contribute to the Franco-Sri Lankan friendship. Our bilateral trade is expanding gradually and will surely increase substantially in the future, as will our investments. We enjoy wearing garments made in Sri Lankan factories, we love a cup of up-country Ceylon tea and relish using your spices in our cuisine (if consumed in moderation!) and we are pleased to know that your national airline will continue to fly our new Airbus aircrafts.

In 2015, France will be the host of the 21st Conference of the Parties on Climate Change (COP 21-Paris 2015) and we hope to work closely with the Ministry of Environment and Renewable Energy of Sri Lanka, and with those NGOs concerned with climate change, to take into account the Sri Lankan position, considering its peculiarity as an island threatened by the effects of global warming. The future of our planet will be at stake in 2015!

I would also like to take this opportunity to mention the special efforts made by the French Embassy and the Alliance Française network (Kotte in Colombo, Jaffna, Kandy, Matara & Galle) for the teaching of the French language which has today become a tool at the disposal of the government, businesses and travel agencies at a time when Sri Lanka’s international relations and economic ties with the rest of the world are flourishing and the flow of tourists is increasing dramatically.

Last year alone, one hundred thousand tourists from francophone countries, among which sixty-five thousand tourists from France, visited Sri Lanka. French is among the few foreign languages which are essential to international relations and it can be learnt in Sri Lanka! In the meantime, we are also working to increase the number of Sri Lankan students in schools and Universities in France.

France is waiting for you!

Turning to the field of tourism, I would like to encourage Sri Lankans to visit and discover France. With several direct flights a week flying from Colombo to Paris, numerous daily flights travelling via the Middle East or other European capitals, Paris and France are ever-more accessible destinations. And if you plan to travel to another European country in the coming months, please do make a stop in neighbouring France to discover or to rediscover our beautiful and historic towns, our sandy beaches and snow-capped mountains or to enjoy a romantic stay in the city of love. We have much to offer: culture, charm, elegance (you surely remember our Miss France contestants visit to Sri Lanka), wines, French cuisine… and much more! We have a facility for improved visa delivery and our Minister of Foreign Afffairs has recently launched a new programme in favour of tourism in France. France is waiting for YOU: come and be part of the relationship between Sri Lanka & France!

Since we are celebrating the French National Day, allow me to say a few words in French:

Finally, I would sincerely like to thank our sponsors for their precious support for tonight’s event as well as for the French Spring events. May I now propose a toast to the good health and well-being of His Excellency President Mahinda Rajapaksa and of the people of Sri Lanka?

To the President and to the people!

I would like to invite the Honourable Minister, Mr Douglas Devananda, to address the audience.