Teaching of French in the island of Sri Lanka goes back to the period of British domination as French was the elite language during that era. But the teaching of this language was limited to few private educational institutions. In independent Sri Lanka, French was introduced in to the national curriculum as a foreign language over three decades ago by the Sri Lankan Ministry of Education.

The Sri Lankan Ministry of Education has taken a timely decision to further promote the teaching of foreign languages in Sri Lankan Schools. In accordance with this decision, the first batch of teacher trainees for French language was recruited to the Pasdunrata National College of Education in Kalutara in 2006. The French Embassy in Colombo was requested by the Ministry of Education to assist in this new project and a MOU was signed between the Ministry and the French Embassy in 2006 with the objective of strengthening the existing cooperation in the field of Education. The French Embassy provided the services of a resource person from France to work full time as a resident lecturer of French language and civilization at the Pasdunrata National College of Education. This MOU also helped to provide the services of visiting Teacher Trainers from France to assist in the development of curriculum and provide further teacher training at the College of Education. His Excellency Mr Michel Lummaux, renewed the existing MOU in May 2008. Therefore, France will continue to assist Sri Lanka in further promoting the teaching of the French Language in the country through training of future French language teachers as well as those who are already in service. 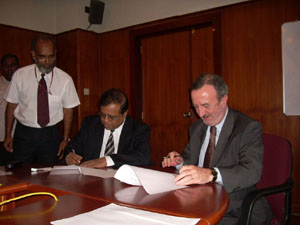 Signing MoU by the Ambassador of France and the Educational Minister.