Home > Culture and Education > Cultural exchanges > Audiovisual and Cinema > Cinema in Sri Lanka > New award for a Sri Lankan director at the International Festival of Asian (...)

New award for a Sri Lankan director at the International Festival of Asian cinema (FICA)France.

The newest "With you, without you" (Nathuwa Oba, Oba Ekka) of Prassana Vithanage’s 7 films (born in 1962), who began his career as a theater director (Bernard Shaw, Dario Fo) was rewarded by the jury of FICA, conquered by the "portrait of an intense and poetic" of a couple’s life that reflects "the ravages of conflict and civil war." 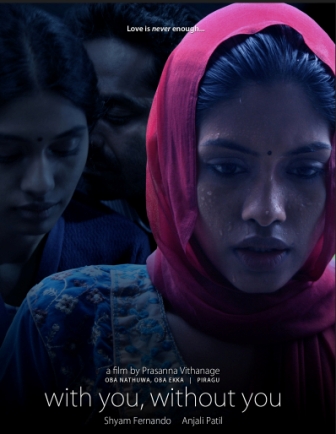 This award is given to a Sri Lankan director for the second consecutive year. In 2012, the Gold Cyclo was awarded to Aruna Jayawardana for his film "August drizzle" (Nikini Vassa) which has been presented for the first Bonsoir Cinema ! The film festival of French-speaking countries of Colombo, before being in theaters in Sri Lanka.

The fourth film of Prassana Vithanage "Death on a full moon day" (Pura Handa Kaluwara) received the Grand Prize of the Festival d’Amiens fourteen years ago. The presentation of this award illustrates the constant concern of the director to combine technical perfection and aesthetic concerns, blending harmoniously the delicacy of visual imagination and the power of reflexivity.

"This award, and international recognition that comes with it, has played an undeniable role in the lifting of censorship after a long legal battle." The film was finally screened in 80 theaters across the country and had a great popular success. About France he says "I appreciate the French cinema, especially Bresson, Chabrol, and also Renoir, Resnais ; I never miss the opportunity to see a film by Agnes Varda."

Undertaken long, the script for the next film of Prassana Vithanage "is now ready." It will be a historical film about the last days of the Kingdom of Kandy perceived through the particular history of several characters, a film that should come "with the support of a French producer." About his creative process he entrust that “Finding the dramatic premise of the film story is important to me. This gives my plot a firm foundation. It is one major guiding principle in my search for truth through the film medium”.

In the meantime, the meeting with this talented movie director who works out of the box can be continued by looking at the ten sections of his personal website.