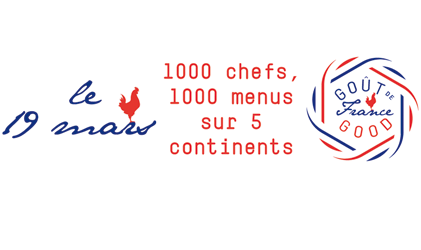 On Thursday, 19 March 2015, in 150 countries around the world, restaurants and embassies will offer 1500 dinners to celebrate France’s gastronomy by inviting the public to share a “French dinner”. In each participating restaurant, the event will pay tribute to a vibrant, open and innovative cuisine, while remaining true to its values of sharing, pleasure, respect for good food and for the planet.

The Goût de France/Good France project is being organized on the initiative of Alain Ducasse and the Ministry of Foreign Affairs and International Development.

In the words of Alain Ducasse: “French cuisine is the interpreter of a cuisine that has evolved towards lightness in harmony with its environment... The common point of this event is generosity, sharing and the love of what is beautiful and tastes good. It will be a delightful interlude and an opportunity to celebrate French cuisine worldwide.” Inspired by Auguste Escoffier, who launched the “Dîners d’Épicure” (Epicurean Dinners) initiative – the same menu, the same day, in several world cities and aimed at as many diners as possible – in 1912, Goût de France/Good France reproduces that beautiful idea with the desire to involve restaurants all around the world.

Each chef will offer a “French-style” menu in their restaurant with a traditional French aperitif, a cold starter, a hot starter, fish or shellfish, meat or poultry, a French cheese (or cheeseboard), a chocolate dessert, French wines and digestifs, while remaining free to highlight their own culinary traditions and cultures.

The cuisine will be accessible to all, from bistros to exceptional restaurants, and based on fresh, seasonal and local products with lower levels of fat, sugar, salt and protein.

The menu’s price is at the restaurant’s discretion, and they are all encouraged to donate 5% of proceeds to a local NGO promoting health and the environment.

France is sending the world a real invitation to journey, bringing together more than 1500 chefs from around the world who will take advantage of French gastronomy’s assets to express their talent and expertise through 1500 menus. On 21 January 2015, all participating restaurants will be presented on the goodfrance.com website. 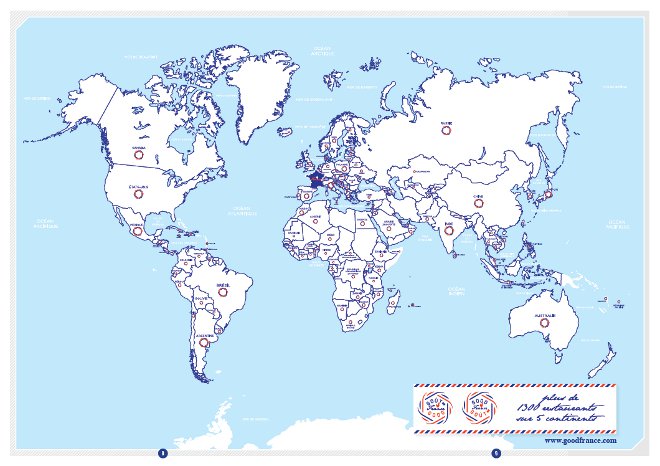