Home > Political affairs > Activities of the embassy > Press Release issued by the Embassy of Sri Lanka in France about Foreign (...) 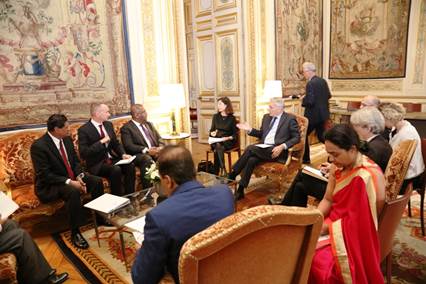 Foreign Minister Mangala Samaraweera, on a three day official visit to Paris, from 1st to 3rd June 2016, reiterated his commitment to elevate the bilateral partnership with France to a higher level in all spheres of co-operation strengthening the existing bonds of friendship between the two countries.

At bilateral discussions with Jean – Marc Ayrault, the Minister of Foreign Affairs and International Development of France, both Ministers acknowledged the longstanding affinities of the two countries bound by common values and aspirations. Minister Samaraweera outlined the progressive political developments achieved by Sri Lanka since the historical presidential elections in January 2015. Minister made reference to the three pillar approach of President Sirisena, strengthening democracy, achieving meaningful reconciliation and fostering economic development. Giving an account of the measures taken by the new government to strengthen democracy, he spoke of the formation of a national unity government for implementing constitutional and legislative reforms, passage of the 19th Amendment to the Constitution curtailing executive powers of the President and presenting of the Right to Information Bill in the Parliament in March 2016.

He emphasized that the decision by the Government to co-sponsor the UN Human Rights Council resolution was a means of coming to terms with its own past which also paved the way to forge ahead with meaningful reconciliation. The structural arrangement devised to give practical orientation to this process namely, the recent statutory provisions passed to setup the Missing Persons Office, the process underway to finalize the Truth Commission, the Accountability Mechanism and the Office of Reparations was explained in detail to his counterpart.

Minister Samaraweera, underlining the development goals of the government emphasized on the need to kick-start the country’s economy in order that the dividends of peace could be felt by all sections of the Sri Lanka society and in this respect sought greater engagement by France in the economic development process. Minister Ayrault, welcomed the great strides taken by Sri Lanka during a short span of time in building a conducive environment for peace and stability. He applauded the ambitious programme launched by Sri Lanka and the timely structures that have been deviced to bring about reconciliation. Minister Ayrault, pledged his country’s firm support in all Sri Lanka’s ambitious endeavours and recognized that France has been a longstanding friend of Sri Lanka and is keen to engage in its development process. In this context, he reaffirmed France’s support for Sri Lanka’s GSP + application and the lifting of the EU fisheries ban. He further stated that the business conclave meeting concluded with MEDEF International (Mouvement des entreprises de France), the most representative organization of the French private sector is a step in the right direction for a strengthened presence of French Investments in Sri Lanka. He added that many opportunities were also present in enhancing trade and tourism ties in consideration of the impressive growth projections for this year.

Three Agreements were also concluded during the visit on improving the Teaching of French in Sri Lanka, cooperation in the field of Cultural Heritage and the sanitation and Hygene Initiative for the town of Negambo (SHIFT), which both Ministers saw as a further step towards strengthening relations.

Both Ministers pledged to deepen the existing ties towards greater convergence for co-operation in the fight against terrorism and climate change which would make the partnership stronger.

At a meeting with the President of the French Constitutional Council, Laurent Fabius, both parties had discussions on the consultative Constitutional reform process that is taking place in Sri Lanka. In highlighting the need for such reforms, Minister Samaraweera, underlined as a prerequisite the reflection of the cultural and ethnic diversity of the social fabric of Sri Lanka.

Minister Samaraweera, during the visit also had meetings with Mr. Matthias Fekl French State Minister for Foreign Trade, Promotion of Tourism and French Nationals Abroad, where both Ministers agreed to have an economic road map to deepen the current economic partnership.

At a meeting with the French Minister of State for Development and Francophonie, André Vallini, the two Ministers discussed avenues for cooperation in expanding the role of the French Development Agency (AFD) in the country stressing also on the importance establishing a fully fledged resident AFD office in Sri Lanka.

Minister Samaraweera also met with Director General of UNESCO, Irina Bokova at the UNESCO Secretariat in Paris. During the very cordial and friendly interactions which took place, Minister of Foreign Affairs drew attention to the importance of the role of education in achieving the policy priorities of the Government. He added that the Government is in the process of introducing changes to the national curriculum to nurture the concept of cohabitation amongst the diverse ethnic groups. In this context, Minister requested the expertise of UNESCO in capacity development and technical assistance to incorporate such changes.

Concluding his official visit to Paris, Minister Samaraweera was also hosted to a luncheon by Madam Véronique Louwagie, President of the Sri Lanka – France Friendship group of the French National Assembly. This event was attended by a distinguished gathering of members both representing the upper and lower chambers of the French Parliament. During the interactions with the representatives which took place in a friendly atmosphere, the parties recognized the need to deepen the dialogue as a further means of consolidating the existing bilateral relations. Ambassador Tilak Ranaviraja of France, Secretary Finance Dr. R H S Samaratunga, Senior Director General of the Ministry of Foreign Affairs, Mr. C.A.H.M. Wijeratne and other Embassy Officials were associated with the visit. 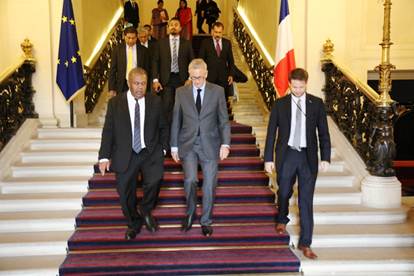