Being passionate about nature, the French Ambassador to Sri Lanka and the Maldives Christine Robichon says that Sri Lanka’s abundance of natural flora has been the icing on the cake during her nearly four-year stay in the island: “Sri Lanka is truly blessed with a variety of trees, bushes and flowers. Some of them very unique, and that is certainly among the many good things I see.” 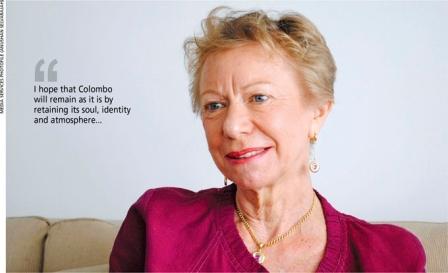 She continues: “But what I would deem as ugly and marring this beautiful natural beauty is the proliferation of billboards around the country. We want to see the trees and flowers, not large boards advertising commercial products.”

Addressing another positive aspect of Sri Lanka, albeit on a different note, she says: “I’m very happy to see infrastructure development with support from foreign friends – including France, which has been involved in the water sector. There is visible progress, although this is blemished by tragic events like those in Weliweriya.”

Robichon points out that Sri Lankans must understand the myriad benefits of new and upgraded infrastructure. “It permeates the entire nation, not just one community or segment. What is worrying is the lack of progress in genuine reconciliation, in rebuilding trust and finding a lasting political solution which has to be shaped by Sri Lankans through a constitutional framework. Each community must feel safe, respected and enjoy equal fundamental rights while feeling that they are part of a nation,” the ambassador urges.

She’s also perturbed by racism rearing its ugly head, religious intolerance and the disproportionate force used by the army against civilians which, she says, must be checked before it fuels unmanageable situations.

The French Ambassador says her role is primarily that of a channel of communication between France and Sri Lanka, facilitating contact – more precisely in the political arena – where dialogue can be initiated between governments: “I’m also the conduit in providing the French Government, MPs and organisations who are interested in Sri Lanka with an objective country assessment, primarily because there are various groups presenting multiple views of Sri Lanka.”

Conversant in four languages, Christine Robichon can also gauge opinions, put them into perspective and be objective in her assessments, which includes ensuring that France is portrayed positively and not as an unfriendly conspiratorial country.

“My role is to establish the truth, lift suspicion, and inform the Government and the people of the ground realities while also espousing our position, values and interests. We have a strong friendship with Sri Lanka, and we are sincere about contributing towards the development of this country which has to be sustainable on all fronts,” she affirms.

Therefore, it is reconciliation and a lasting political solution that she sees as the most pressing issues facing Sri Lanka today. And at a global level, she feels that the arms and ammunition trade – which fuels unnecessary wars around the world – and the challenges posed by climate change require urgent attention. Ambassador Robichon is also concerned about the change in the general psycho-social milieu among Sri Lankans.

“I arrived eight months after the end of the war, and the general feeling permeating the country was one of relief and hope. Today, this has vanished, although I fervently wish that hope will prevail,” she explains. As for the city of Colombo, she is enthusiastic about the progress that has been made: “It is surely cleaner and more active. I’m also very happy to see the concerted efforts in rehabilitating heritage buildings, although what I would like to see is a more cohesive fight against noise pollution.”

She adds: “What I don’t want to see however, is Colombo becoming a replica of Dubai or Singapore in 10 years. I hope that Colombo will remain as it is by retaining its soul, identity and atmosphere.” With France being one of the more popular countries sought after by migrants, Robichon has difficulty comprehending the reasons for migration. She observes that “there are plenty of employment opportunities, but somehow getting the right person seems to be a challenge. It is strange that young Sri Lankans want to migrate to countries where there is considerable unemployment, whereas Sri Lanka’s employment rate is higher.”

And Robichon continues: “Another traumatic aspect that must be addressed is that too many Sri Lankans are misinformed of the risks [involved] in migration, as they rely on the advice of coordinated groups who have criminal intent to hoodwink vulnerable people.” Acknowledging that Sri Lankan businesses are doing extremely well in France, especially in the lingerie and apparel arenas, she observes that despite a decline in apparel exports from Sri Lanka to Europe, there’s been an incline in orders from France.

“I would like to see more arts and craft, especially handlooms, being exported to France because we are a nation that appreciates handcrafted goods. And similarly, I feel that Sri Lankan businesses must also be encouraged to explore the Ayurvedic sector, as I see an emerging need for such holistic therapeutic treatments in my country,” Ambassador Christine Robichon reveals.