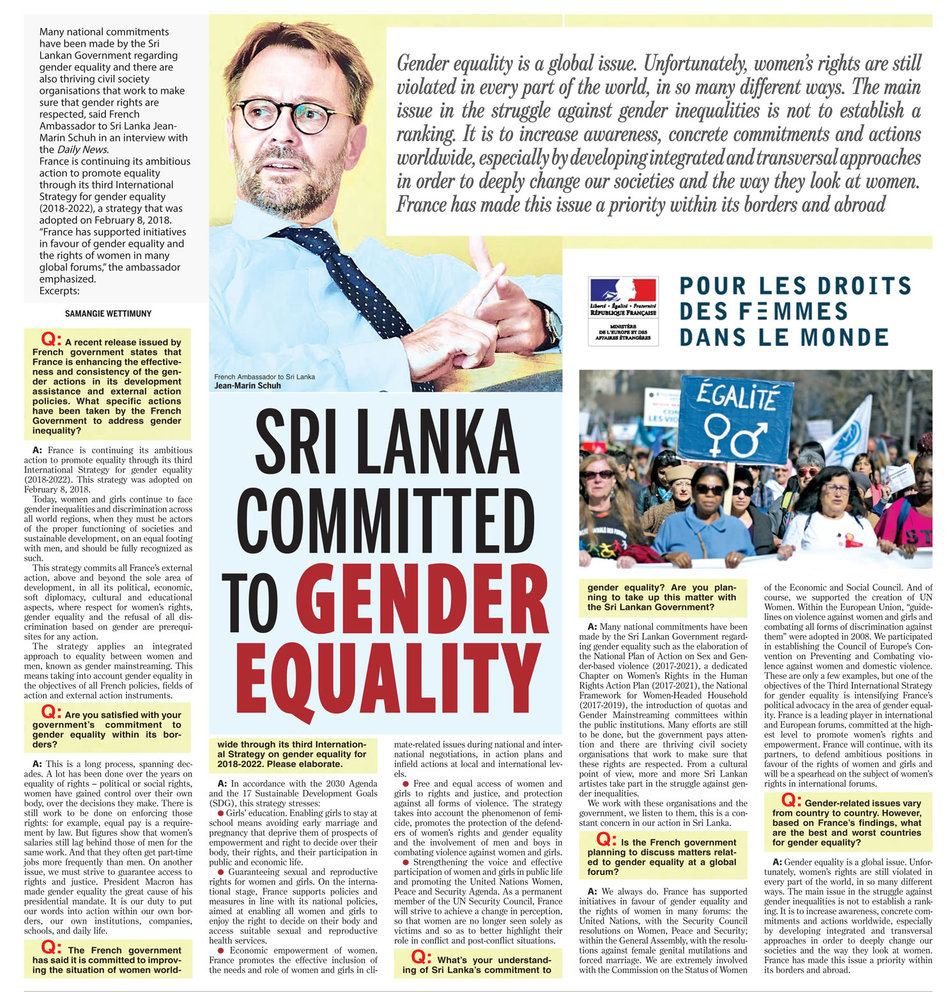 Many national commitments have been made by the Sri Lankan Government regarding gender equality and there are also thriving civil society organisations that work to make sure that gender rights are respected, said French Ambassador to Sri Lanka Jean-Marin Schuh in an interview with the Daily News.

France is continuing its ambitious action to promote equality through its third International Strategy for gender equality (2018-2022), a strategy that was adopted on February 8, 2018.

“France has supported initiatives in favour of gender equality and the rights of women in many global forums,” the ambassador emphasized.

Q : A recent release issued by French government states that France is enhancing the effectiveness and consistency of the gender actions in its development assistance and external action policies. What specific actions have been taken by the French Government to address gender inequality ?

A : France is continuing its ambitious action to promote equality through its third International Strategy for gender equality (2018-2022). This strategy was adopted on February 8, 2018.

Today, women and girls continue to face gender inequalities and discrimination across all world regions, when they must be actors of the proper functioning of societies and sustainable development, on an equal footing with men, and should be fully recognized as such.

This strategy commits all France’s external action, above and beyond the sole area of development, in all its political, economic, soft diplomacy, cultural and educational aspects, where respect for women’s rights, gender equality and the refusal of all discrimination based on gender are prerequisites for any action.

The strategy applies an integrated approach to equality between women and men, known as gender mainstreaming. This means taking into account gender equality in the objectives of all French policies, fields of action and external action instruments.

Q : Are you satisfied with your government’s commitment to gender equality within its borders ?

A : This is a long process, spanning decades. A lot has been done over the years on equality of rights – political or social rights, women have gained control over their own body, over the decisions they make. There is still work to be done on enforcing those rights : for example, equal pay is a requirement by law. But figures show that women’s salaries still lag behind those of men for the same work. And that they often get part-time jobs more frequently than men. On another issue, we must strive to guarantee access to rights and justice. President Macron has made gender equality the great cause of his presidential mandate. It is our duty to put our words into action within our own borders, our own institutions, companies, schools, and daily life.

Q : The French government has said it is committed to improving the situation of women worldwide through its third International Strategy on gender equality for 2018-2022. Please elaborate.

A : In accordance with the 2030 Agenda and the 17 Sustainable Development Goals (SDG), this strategy stresses :

* Girls’ education. Enabling girls to stay at school means avoiding early marriage and pregnancy that deprive them of prospects of empowerment and right to decide over their body, their rights, and their participation in public and economic life.

* Economic empowerment of women. France promotes the effective inclusion of the needs and role of women and girls in climate-related issues during national and international negotiations, in action plans and infield actions at local and international levels.

* Free and equal access of women and girls to rights and justice, and protection against all forms of violence. The strategy takes into account the phenomenon of femicide, promotes the protection of the defenders of women’s rights and gender equality and the involvement of men and boys in combating violence against women and girls.

* Strengthening the voice and effective participation of women and girls in public life and promoting the United Nations Women, Peace and Security Agenda. As a permanent member of the UN Security Council, France will strive to achieve a change in perception, so that women are no longer seen solely as victims and so as to better highlight their role in conflict and post-conflict situations.

Q : What’s your understanding of Sri Lanka’s commitment to gender equality ? Are you planning to take up this matter with the Sri Lankan Government ?

A : Many national commitments have been made by the Sri Lankan Government regarding gender equality such as the elaboration of the National Plan of Action on Sex and Gender-based violence (2017-2021), a dedicated Chapter on Women’s Rights in the Human Rights Action Plan (2017-2021), the National Framework for Women-Headed Household (2017-2019), the introduction of quotas and Gender Mainstreaming committees within the public institutions. Many efforts are still to be done, but the government pays attention and there are thriving civil society organisations that work to make sure that these rights are respected. From a cultural point of view, more and more Sri Lankan artistes take part in the struggle against gender inequalities.

We work with these organisations and the government, we listen to them, this is a constant concern in our action in Sri Lanka.

Q : Is the French government planning to discuss matters related to gender equality at a global forum ?

A : We always do. France has supported initiatives in favour of gender equality and the rights of women in many forums : the United Nations, with the Security Council resolutions on Women, Peace and Security ; within the General Assembly, with the resolutions against female genital mutilations and forced marriage. We are extremely involved with the Commission on the Status of Women of the Economic and Social Council. And of course, we supported the creation of UN Women. Within the European Union, “guidelines on violence against women and girls and combating all forms of discrimination against them” were adopted in 2008. We participated in establishing the Council of Europe’s Convention on Preventing and Combating violence against women and domestic violence. These are only a few examples, but one of the objectives of the Third International Strategy for gender equality is intensifying France’s political advocacy in the area of gender equality. France is a leading player in international and European forums, committed at the highest level to promote women’s rights and empowerment. France will continue, with its partners, to defend ambitious positions in favour of the rights of women and girls and will be a spearhead on the subject of women’s rights in international forums.

Q : Gender-related issues vary from country to country. However, based on France’s findings, what are the best and worst countries for gender equality ?

A : Gender equality is a global issue. Unfortunately, women’s rights are still violated in every part of the world, in so many different ways. The main issue in the struggle against gender inequalities is not to establish a ranking. It is to increase awareness, concrete commitments and actions worldwide, especially by developing integrated and transversal approaches in order to deeply change our societies and the way they look at women. France has made this issue a priority within its borders and abroad.