Three French artists will participate in the Fairway Galle Literary Festival 2018: the photographer Marie-Caroline Senlis, the writer Maylis de Kerangal and, through her film, the film director Dominique Cabrera. Since its launch in 2007, the festival has become one of the most important literary events in South Asia for both authors and literary fans around the world. The festival is celebrated every year around the historic Dutch Fort of Galle, a UNESCO World Heritage Site.

FOCUS on January 25th, the imagination of those three women will be showcased around a series of cultural events within the heart of the fort.

Through this new collection of black and white silver gelatin photographs, hand painted with ink, Marie-Caroline Senlis offers a poetic vision of the environment that surrounds us; it is a way to depict the beauty and majesty of nature and thus an invitation to let the spirit wander. At first, there is Chinese painting and its spring flowers, and also the former color photographs, which were black and white photos painted with color inks. These painted photos were in vogue in Asia for a long time. In Sri Lanka, vegetation is dense, very green. In the middle of all these greens, another color occasionally springs, flower or fruit. The artist took this approach of painted photography, that she already used in an Indian set of portraits. She uses her skill with both silver gelatin photography, watercolour painting, Chinese calligraphy, for a special Lankan collection: "Bloom". Immersing herself in the spirit of each tree, she gives them a new life, with this poetic and elegant collection of pictures.

Marie-Caroline Senlis is a French photographer, living in Colombo. She has been living in Asia for nearly twenty years, and has been profoundly inspired by her different experiences in China, Pakistan, Afghanistan, India and Sri Lanka. After studies in Chinese, Literature and Linguistics, Marie-Caroline Senlis focused on Art and Fine Art studies, Photography, Sculpture and Drawing. She works mainly in black and white, with films, doing silver gelatin prints herself in the darkroom, as it is a way to deepen subjects and give space to a poetic approach on art and photography. She explored different topics such as trees, misty landscapes, sea, portraits, Versailles’ gardens, abstraction and matter, mystic sites, pregnant women nudes, photo-reportage, and more. Whatever the subject is, poetry, dreams and surrealism are always there. She exhibited her work in France and Asia, and the last two years in Sri Lanka.

The director Dominique Cabrera will be present through her film "Corniche Kennedy", adaptation of the work of Maylis de Kerangal projected on the occasion of the visit of the writer - Screening of the film: 7:30pm-9pm

Rediscovering the flavor of myth and imagination while staying closer to the city she loves, Marseille, this was the wish of Dominique Cabrera. Maylis de Kerangal’s novel serves as a springboard, literally and figuratively.

She films Suzanne, a schoolgirl from a wealthy background, watching from her deck, fascinated, a bunch of boys and girls jumping into the sea, from the famous Corniche Kennedy. She approaches them and is accepted by them. The heart of the film is this corniche, end of magical territory, magnificent balcony on the sea. The boulevards, the wall of rocks, the blue water are the stage of the characters’ life; and the jump, a trial bringing beauty, thrill, glory and power. Everything will change when teens are involved in drug trafficking. 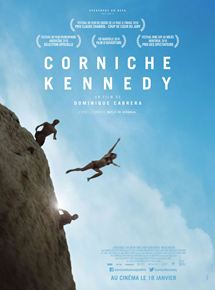 The French author Maylis de Kerangal will lead a discussion about the film and the power of the writer through his imagination - Discussion: 9pm-11pm

Maylis de Kerangal will discuss "Corniche Kennedy", a novel she published in 2008 and which is adapted to the cinema in 2016. This novel is the first real success of its author to the public and the critics, and have been part of the finalists of many literary prizes (Femina prize, Medici prize, France Culture / Télérama prize). She will also develop the discussion around the writer’s imagination and the power of the artist in general.

During the festival, she will unveil to the Sri Lankan public her first novel, Birth of a Bridge, which presents a literary saga of a handful of men and women who are responsible for building a bridge somewhere in a mythical California. The novel was published in 2010, has received the Medicis Prize and the Premio Gregor von Rezzori, and has been translated into several languages. She will also present Mend the Living, published in 2014, and winner of the 2017 Welcome Book Prize (UK). Maylis de Kerangal is the first French writer to have won this prize. Her writings have been widely praised for their scope, originality and the use of language. Her style is rich, imaginative and innovative, playing on many different levels, inventing words, juggling with speed and tension notably through the ellipse.

She will host workshops with Ashok Ferrey, writer and illustrator whose book Colpetty People is currently the best-selling English fiction book in Sri Lanka. He is known as one of the best writers in Sri Lanka and is appreciated for his witty and acerbic sense of humour which is evident in his writing. 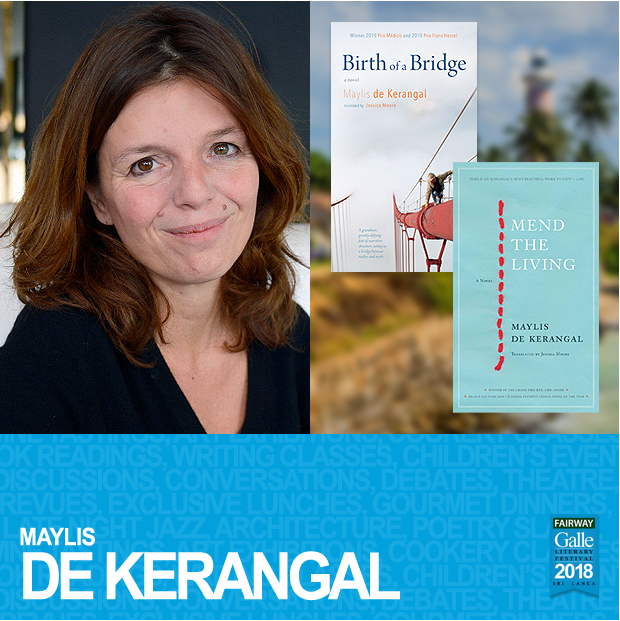 On January 25th, this series of events (exhibition, film, discussion) will be a nod at the Night of Ideas 2018. The Night of Ideas, an initiative proposed by the French Institute, is organized on four continents, this year around "Power to the imagination". It brings together artists, intellectuals, philosophers and all those who want to join a discussion on topical issues, but also more philosophical concepts and ideas.